I watched about half of ‘Adam’s Rib’ on YouTube here to get a fuller perspective in posting this article, in which I highlight key points. Katherine Hepburn, playing the feminist wife declared: “Equality: mutual everything or nothing.” Then she mocks him to wear the pants and become superior.

The Talmudists go all out, including presenting actors in drag, pictured below — in 1949!! They’ve been mocking men ever since, to re-engineer society, replacing our Creator’s guidelines, so they can one day rule everyone — carrying out Satan’s NWO plan.

ADAM’S RIB: A FEMINIST GENDER BENDER FROM 1949
by Anon
(Abridged by henrymakow.com)

Why am I writing about a movie from 68 years ago that most people have forgotten? Because it shows that the Golden Age of Hollywood was not really “sweet and innocent” at all. It helps to answer the questions “how was our society destroyed?” and “where did it begin?” 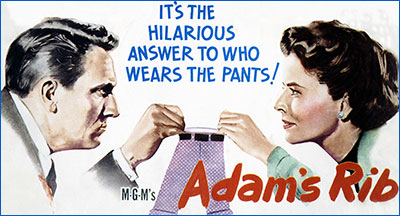 Adam’s Rib is a feminist gender bender movie from 1949. Notice that the title is Biblical but the movie is Anti-Biblical. This tricked conservatives into thinking that it was a safe movie to watch.

The plot involves a woman who shoots her unfaithful husband and puts him in critical condition but is found “not guilty” by a court of law. [Echoes of Chicago]

A lawyer (Spencer Tracy) is assigned to represent the man in court. His wife (Katherine Hepburn), instead of supporting her breadwinning husband who lavishes her with gifts, thinks it is fun to compete with her husband and to ridicule him in court. “Ridicule is man’s most potent weapon” -radical communist Saul Alinsky.

The lawyer’s reaction is to yell “I wanted a wife, not a competitor!”

His liberal wife does not cook, clean, nor raise any children. She spends her time drinking, smoking, and going to fancy restaurants. And insulting and goading her conservative husband whenever he disagrees with her.

When her husband gives her a fancy hat, she gives it away to her client accused of attempted murder.

She effortlessly gets a job as a lawyer on a whim. …

The victim of the shooting is mocked by transforming into a woman.
All men in the film are mocked except for an effeminate songwriter. …

As the lawyer’s wife gives him a massage, she slaps him. But when he gives her a massage and slaps her, she is offended. There are two sets of rules: Although they are “equals”, she can do things that he is not permitted to do. “Some are more equal than others” – George Orwell. …

At the beginning of the movie, women had cried repeatedly to manipulate men. …

Throughout the movie, a neighbour plays the song “Farewell Amanda” on the piano…. The song was written by homosexual occultist Cole Porter (Scroll and Key). The effeminate piano-playing joker in the movie is a dead ringer for Cole Porter, too. He mocks the husband at every opportunity and hits on his wife right in front of him. The husband lets it go. He is too weak to defend his wife. …

Both the lawyer and his wife call each other “Pinky”, hardly a manly moniker. Once again they are portrayed as almost identical equals.

The husband is continually made to look like a fool. He jumbles his lines, he bumps his head, and he gets lifted in the air by a woman in court who is clearly much stronger than he is. Everyone thinks it is hilarious. “A good tactic is one your people enjoy” – Saul Alinsky.

The smartest person in the movie is another woman in court who has endless degrees and credentials. …

This movie always gets a high rating from critics. It is well-acted, full of humour, and it makes you think. However, morality is never taken into account in their ratings. If it was, Adam’s Rib would rate a zero.

The main message of the movie is that “man is evil and weak, and woman is strong and virtuous, so women don’t need men”.

It is almost as if Spencer Tracy’s character in Adam’s Rib represents God of the Bible, and the secular crowd mocks him and are unthankful for his gifts.

Adam’s Rib mocks conservative values and glorifies liberalism, much as All in the Family would do 22 years later, starting in 1971.

[Editor’s note: Norman Lear, producer of “All in the Family,” was raised Jewish. He considered his Jewish father a “rascal,” and then created the Archie Bunker character as a white protestant rascal for Americans to laugh at (cued by the laugh track) every week for years:

Lear was born in New Haven, Connecticut,[2] the son of Enie/Jeanette (née Sokolovsky) and Hyman “Herman” Lear, a traveling salesman.[3][4] He has a younger sister, Claire Lear Brown (1925-2015).[5] Lear grew up in a Jewish home and had a Bar Mitzvah ceremony.[6] His mother was born in Elizabethgrad in Kherson Gubernia in Ukraine, while his father was born in Connecticut, to Russian-born parents.[7][8][9]

“All in the Family” was immensely popular in the ’70s:

The show is often regarded in the United States as one of the greatest television series of all time.[3] The show ranked number one in the yearly Nielsen ratings from 1971 to 1976. … TV Guide’s 50 Greatest TV Shows of All Time ranked All in the Family as number four. Bravo also named the show’s protagonist, Archie Bunker, TV’s greatest character of all time.[5] (source)]

The Luciferians, the communists, and in more recent years Hollywood, have been fomenting this “Battle of the Sexes” for hundreds of years. It is a cornerstone in their “divide and conquer” tactic. What else would you expect from Hollywood, the land of immorality propaganda?

“There is no way of influencing men so powerfully as by means of the women. These [women] should therefore be our chief study; we should insinuate ourselves into their good opinion, give them hints of emancipation from the tyranny of public opinion, and of standing up for themselves; it will be an immense release to their enslaved minds to be freed from any one bond of restraint, and it will fire them more, and cause them to work for us with zeal, without knowledge that they do so, for they will only be indulging their own desire for personal admiration.”

This undermining of Godly morals and traditional families is essential for the luciferian globalists to replace God with lucifer, demoralize society, and set up a New World Order dictatorship. “The family is enemy number one,” said satanist Aleister Crowley.

Yes, we were programmed to accept feminist gender bending and immorality a long time ago, as this movie from 1949 aptly illustrates.

More, directly from the article: ADAM’S RIB: A FEMINIST GENDER BENDER FROM 1949

When the lawyer’s wife asks the jury to picture a role reversal, two women morph into effeminate men and the man morphs into an ugly woman.   All three are shown dressed in drag, promoting transvestism and transgenderism.

“Feminism masquerades as a movement for women’s rights. In reality, feminism is a cruel hoax, telling women their natural biological instincts are “socially constructed” to oppress them.

Each time a “new normal” got past the censors on the pretext that “great art must not be suppressed,” there was no turning back. Older movies seem attractive to us now because they nostalgically convey the more virtuous climate of the past, but within each time period, Hollywood was always boiling the frog toward greater immorality. – James Perloff (source)