When I heard about the coronavirus on January 21, this vision was the first thing I thought of, having heard Paul Cain discuss this a number of times around 1989, especially in his interviews with Mike Bickle, but also in person.

The End Times: A Vision by Paul Cain 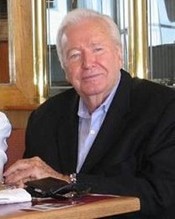 Paul has had several specific burdens and prophetic expectations for the Body of Christ today and in the days to come. He has had reoccurring visions concerning the end times, which he believes are rapidly approaching. About 30 years ago the Lord gave Paul a vision that has occurred to Paul more than 100 times and still reoccurs to this day.

It is a vision of the last days when sports stadiums all over the United States are filled with thousands of people. In this vision, people are being healed and miracles are happening to thousands in the name of Jesus Christ. People are turning to the Lord in droves and the whole nation is in revival. It seemed the whole earth was turning to Christ.

Television news reporters are broadcasting stories of resurrections and miracle healings. None of the secular reporters could get near the men on the platform. They did not know who the men were. Paul described them as “almost faceless men.” He hears a TV anchorman saying, “There are no sporting events to report tonight because all the stadiums, ball parks and arenas are being used for large revival meetings and are filled with people crying, ”Jesus is Lord, Jesus is Lord.”

In these visions, Paul saw these men minister for three days and nights without food, water or change of clothing. Supernatural strength enabled them to continue for these long periods. In the vision, Paul is standing at the crossroads of life and sees a billboard that says, “Joel’s army now in training.” People are being trained to walk in obedience to Jesus. They have learned patience and endurance, have the power of God and having done all, they know how to stand against the enemy.

“They will have the mind of Christ,” Paul said. “They will partake of the heavenly calling and be a new breed, God’s dread champions.” Those ministries will be filled with such passion for Jesus and the power of the Spirit that the host of darkness will dread their impact.

Paul said in the midst of the Laodicean church age of lethargy and apathy, that God was preparing in hiddenness an army to pull down enemy strongholds, and go forth in the power of God and have pure and undefiled religion.

“He’s going to do this with a people who have stripped themselves and separated themselves from the world, the flesh and the devil,” Paul said. “They will realize the end time is here and that things are in a mess and things at the end time are different. Just as it required total sacrifice on the part of the disciples to begin this thing, it will require an equal commitment from us to complete the task in the end times. Joel’s mighty army, as described in Joel Ch. 2 is the army of God – not a wicked army, as some have thought. They are the ones with ‘feet of iron not mixed with clay’, with the wisdom of God alone, not imitators of other men of God. Some of the superstars of the Church will fall. The Lord will have an army of holy anointed vessels to usher in His kingdom so that no one man can take credit for it. It will be to the glory of God alone.”