And why women are ‘better at remembering a conversation’ 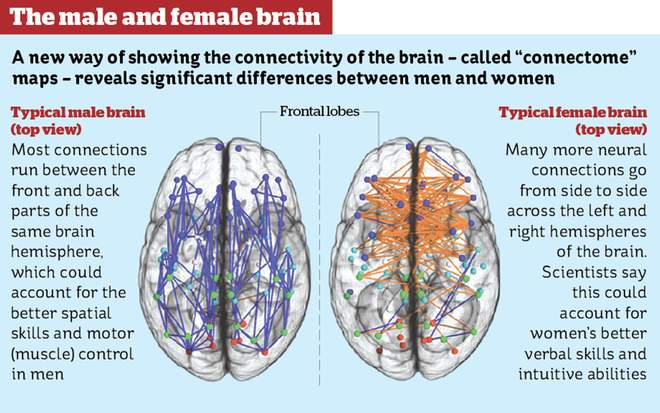 A pioneering study has shown for the first time that the brains of men and women are wired up differently which could explain some of the stereotypical differences in male and female behaviour, scientists have said.

Psychological testing has consistently indicated a significant difference between the sexes [though this has been downplayed by educators – editor] in the ability to perform various mental tasks, with men outperforming women in some tests and women outperforming men in others. Now there seems to be a physical explanation, scientists said.

“These maps show us a stark difference – and complementarity – in the architecture of the human brain that helps to provide a potential neural basis as to why men excel at certain tasks, and women at others,” said Ragini Verma, professor of radiology at the University of Pennsylvania in Philadelphia.…

A special brain-scanning technique called diffusion tensor imaging, which can measure the flow of water along a nerve pathway….

Because the female connections link the left hemisphere, which is associated with logical thinking, with the right, which is linked with intuition, this could help to explain why women tend to do better than men at intuitive tasks, she added.

“Intuition is thinking without thinking. It’s what people call gut feelings. Women tend to be better than men at these kinds of skill which are linked with being good mothers,” Professor Verma said. …

Men tend to outperform women involving spatial tasks and motor skills – such as map reading – while women tend to better in memory tests, such as remembering words and faces, and social cognition tests, which try to measure empathy and “emotional intelligence”. …

“It’s quite striking how complementary the brains of women and men really are,” said Rubin Gur of Pennsylvania University, a co-author of the study.

Adrian Rogers on MEN and WOMEN: Celebrate the Difference — “God made us different that He might make us ONE.” It’s time to stop trying to be the be the same or resenting each other because of our differences.

The Purpose of Feminism articles at ToBeFree